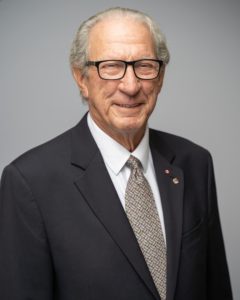 Reginald W. Richard spent thirty years with a national life, property and casualty insurer in all domains of insurance in the Atlantic Provinces, Western Canada and Ontario. He is a past member of the IBC Atlantic Insurance Advisory Committee and served on various co-operative and credit union committees.

Mr. Richard was appointed Superintendent of Insurance for New Brunswick, and later was a member of the New Brunswick Hospital Liability Insurance Committee. After retiring in 1999, Mr. Richard served on the Board of the Canadian Life and Health Insurance Association (CLHIA) Consumer Assistance Centre, which later evolved into OLHI with new leadership, governance, and a mandate to provide impartial and independent consumer complaint resolution services.

As a long-tenured member of the OLHI Board of Directors, Mr. Richard has served as Chair of OLHI’s Standards Committee since 2006 and has a keen interest in information technology, product management, dispute resolution and working with Regulators.